Surprise, surprise! I am again at a loose end this evening before retiring to read more of Neal Stephenson’s latest novel Reamde, which I have been enjoying immensely and trying to eke out as long as I can.

So, to continue with detective fiction, firstly with the novels of Nicholas Blake , the pseudonym under which Cecil Day Lewis penned detective novels. His prime detective is Nigel Strangeways, based originally, according to Wikipedia, on the poet W. H. Auden. He’s rather effete I thought when I recently reread one of the books The Widow’s Cruise it was.  Still the books are civilised and quite readable. 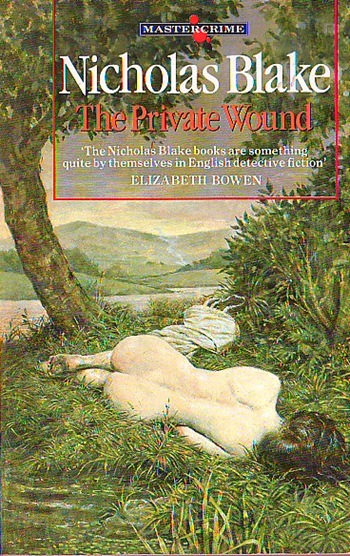 Gore Vidal , author of many mainstream novels, wrote several detective stories under the name of Edgar Box. I appear to have only one of them – Death Likes It Hot with a rather good cover. 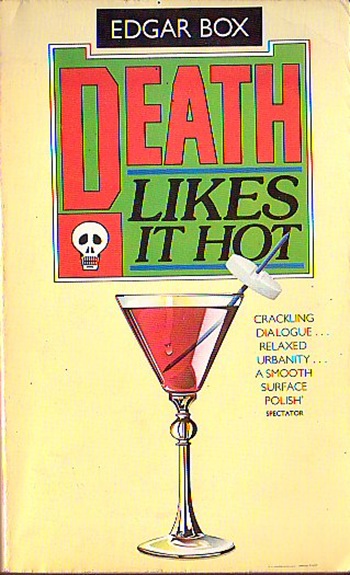 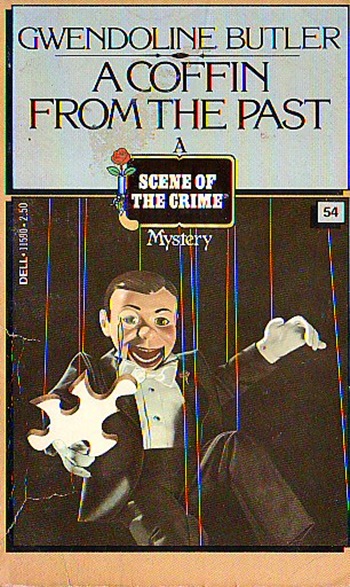 And to finish this post, a stray Raymond Chandler novel – The Lady in the Lake, Pan edition published in 1979. 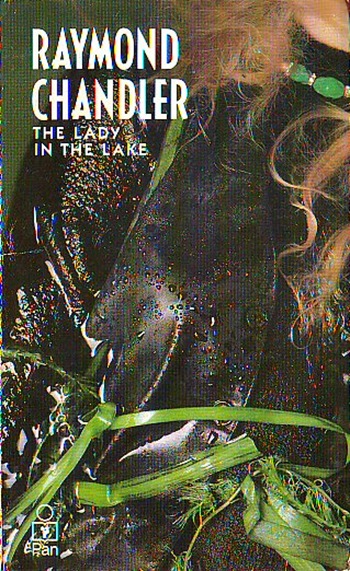 How time flies when you’re not doing much in particular. I noticed today that my last post on this blog was back in early September. Tonight finds me at a loose end so I will start posting on my general crime/detective fiction collection.

Alphabetically as usual I will start with the crime novels of Lesley Grant Adamson who has written sixteen novels in this genre, her first being Patterns in the Dust published in 1985 by Faber. I remember her novels as being quite good, so much so that I collected them for a time, but appear to have only three of them on my bookshelf. 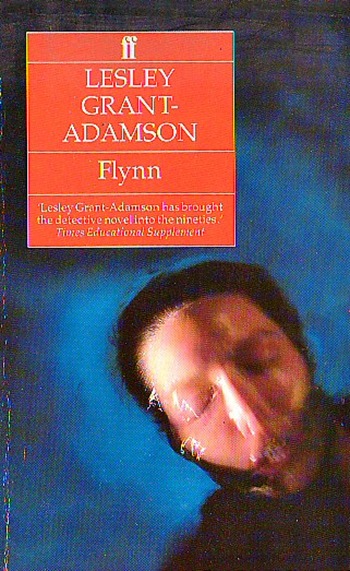 Joan Aiken, sadly no longer with us, was well known as a children’s book author, but she also tried her hand at other types of literature, crime fiction being one of them. I have only Blackground, which is characterised by her wonderful quirky style. 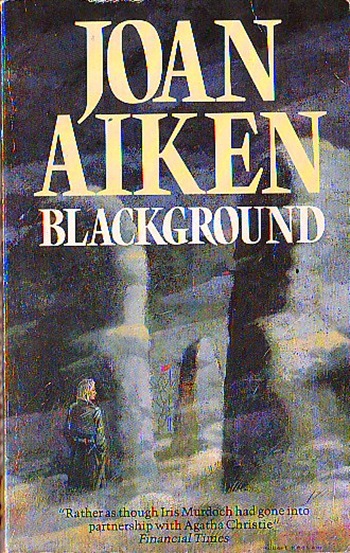 Another grand dame of crime fiction was Margery Allingham who wrote many novels, most of them featuring her literary detective Albert Campion of which the following is one. 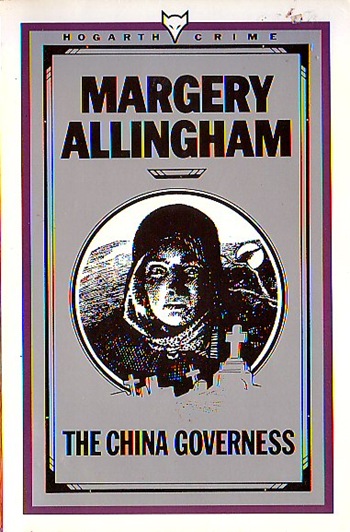 Next, a curious collection of omnibus editions under the imprint of Black Box Thrillers published by Zomba, quite a rarity these days I assume. They have great faux retro covers.

I will continue this thread soon with the crime novels of Nicholas Blake, Edgar Box  and Gwendoline Butler.

I might as well polish off the last of the Penguin Crime novels in my collection in this post.

To start, the detective novels of Julian Symons, who wrote over thirty crime novels over a period of 51 years. I have only a small collection of his books, and even though it is many years since I’ve stuck my nose in them, I remember them as superior crime fiction.

Josephine Tey was the nom de plume of Elizabeth Mackintosh, who also wrote plays under the pseudonym of Gordon Daviot. Her detective novels still stand up today. The most famous of them is The Daughter of Time, an investigation into the guilt or otherwise of the much maligned King Richard III. Below is my ancient (1964) Penguin edition of the book. 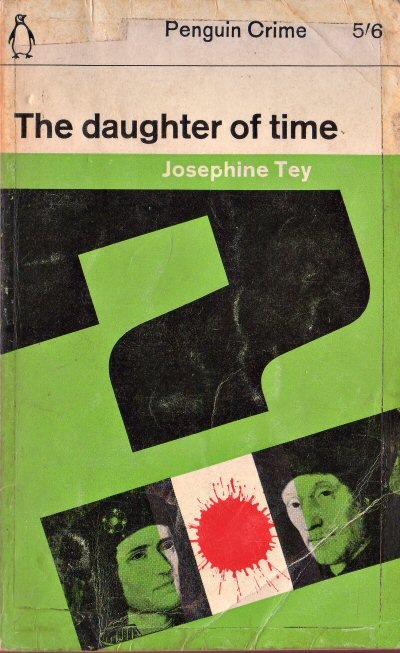 The Franchise Affair is based on the true story of Elizabeth Canning who falsely accused two innocent women of kidnap and abuse.  Bratt Farrar concerns false identity and like all Tey’s mystery novels is well worth reading.

Robert van Gulik is famous for his Judge Dee mysteries set in ancient China. I have quite a few of the Judge Dee novels in other editions, so The Emperor’s Pearl is my sole Green Penguin edition. It was published in 1966. 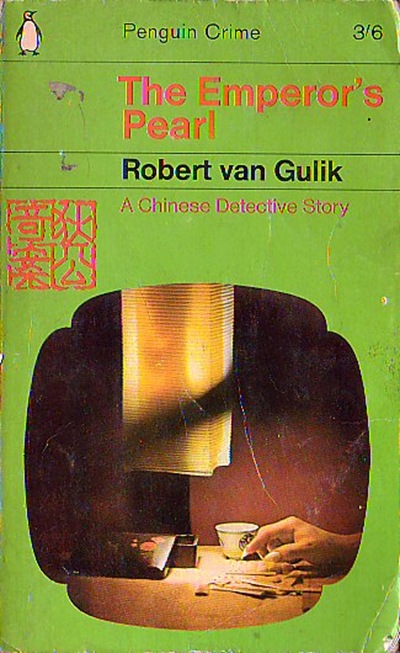 The Hazell crime novels were written as an off shoot from the Television series of the same name.  Published under the name P. B. Yuill, the books were a collaboration between Gordon Williams and Terry Venables. The following editions were published in Penguin in the late 1970s.

And finally for Penguin Crime a collection edited by Michele B Slung, Crime On Her Mind featuring female sleuths.  It was published in 1977. 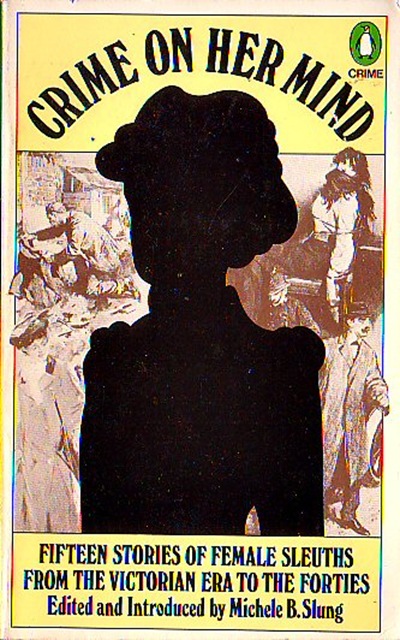 Coming next is the rest of my collection of detective novels in various editions.

I have been remiss again. So much for retirement from the work force, I seem to be busier than ever with trivial distractions.

But to continue with Penguin Crime, here is the next instalment…

P. D James is well known in the field of detective fiction, particularly for her Adam Dalgliesh detective series of which I have quite a few, all published by Penguin.

The following are more Adam Dalgliesh novels. P D James also wrote a quite interesting dystopian novel The Children of Men, which I will display later. 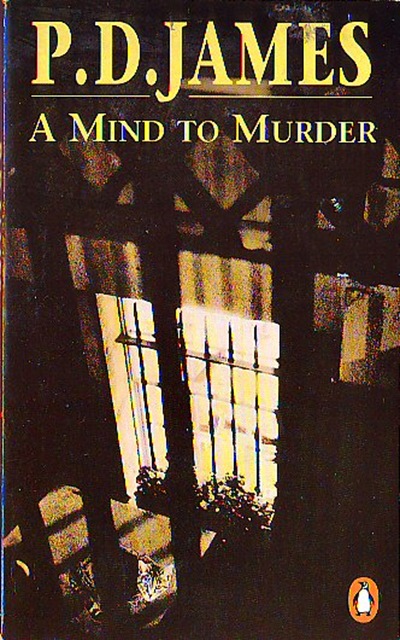 The detective novels of H.R.F. Keating are set in India, his detective character being Inspector Ghote of the Bombay CID. It is remarkable how many detective novels are set in unusual locations and periods. I suppose it adds a certain exoticism to the storyline. These Penguin editions date from the mid 1970s.

Also set in the exotic location of Berlin during the Nazi ascendancy , Philip Kerr’s Bernie Gunther novels are of the hard boiled Raymond Chandler type. The first three of the Bernie Gunther series are available in the omnibus edition Berlin Noir which comprises the three novels March Violets, The Pale Criminal and A German Requiem. A friend loaned me the collected edition, and I desultorily tried to collect the individual volumes, hence the sole copy of A German Requiem in my library. 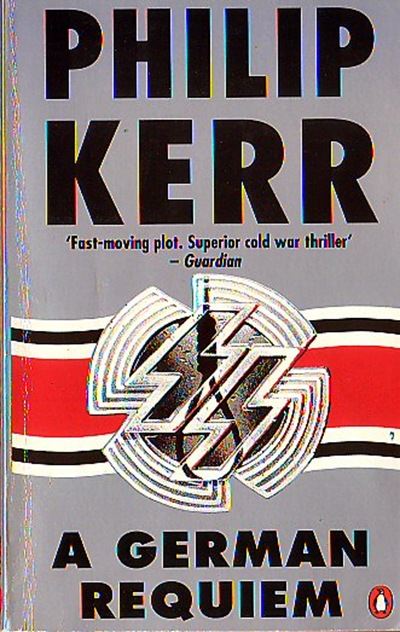 Back to more conventional crime locales with the novels of Hilda Lawrence. There’s not much about her on the web, but I recall not minding these novels at all. 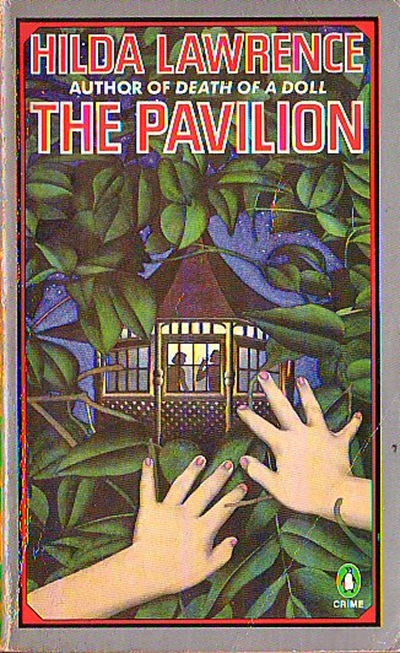 Next Mad Hatters Holiday by Peter Lovesey. This appears to be the only one of his books I have. It’s an old Penguin edition published 1981. 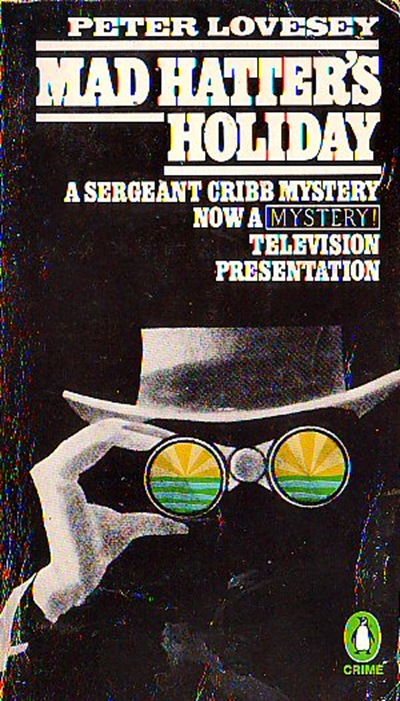 Margaret Millar is an American Canadian crime writer, who is married to fellow crime novelist Ross MacDonald. It is years since I last read the two novels below, so can’t really remember what they were like, but they sound quite interesting from the blurbs on the back.

And finally for this post, Edwin of the Iron Shoes by Marcia Muller, which was her first novel featuring female sleuth Sharon McCone and was published by Penguin in 1978. 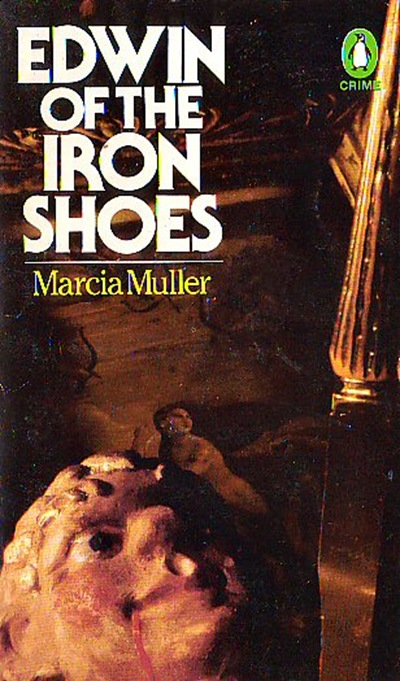 There are only about a dozen or so Penguin crime novels left to display. I’ll try and get them out of the way soon, then tackle the rest of my crime and mystery collection.

Tsk tsk, I have been remiss once more in not posting anything new on this blog for a while.

To make up for it, here are a few more books in the Penguin Crime series.

Continuing alphabetically, first off the rank is The Rivals of Sherlock Holmes edited by Hugh Greene who was the elder brother of Graham Greene, and Director General of the BBC from 1960 – 1969.  He edited several crime anthologies and was creative consultant to the TV Series of the same name. The Penguin edition below was published in 1972. 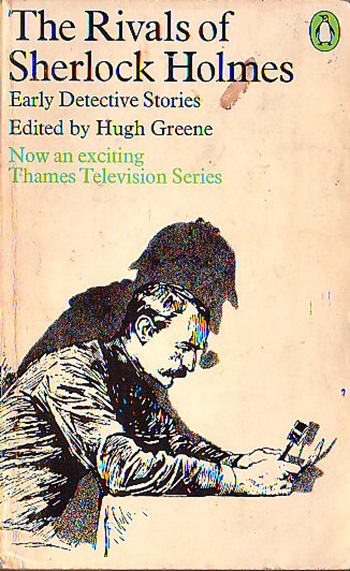 William Haggard was an English writer of fictional spy thrillers set in the 1960s through the 1980s. Venetian Blind is one of them though I can’t remember a thing about it. The Penguin edition pictured was published in 1964. 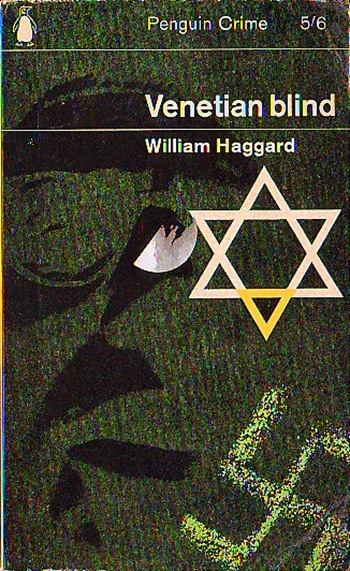 Michael Innes, was the pseudonym of academic J.I.M Stewart, under which he wrote many detective stories, most of them featuring Scotland Yard Detective Inspector John Appleby.

I’m a great fan of Michael Innes detective stories. They have devilishly clever plots, are crazily eccentric and above all, are great fun. I have quite a collection of his books in Penguin Crime editions, most I must admit I purchased fairly recently second-hand though they are oldish editions with classy covers, dating from the 1960’s. 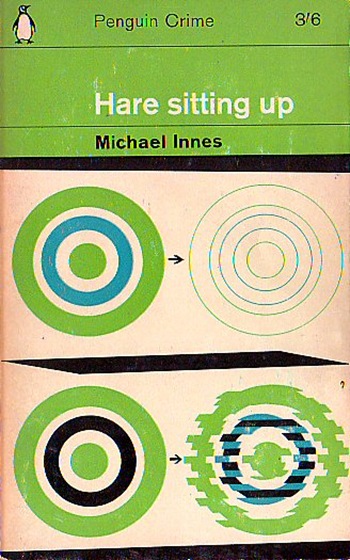 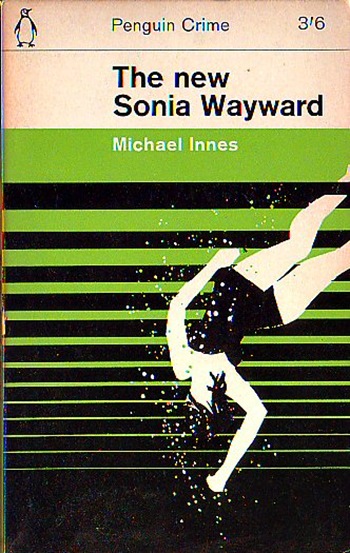 The two omnibuses below were purchased in the 1980’s.

Coming up – PD James and other classics of Penguin Crime